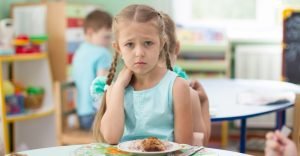 Though eating disorders have long been perceived as illnesses affecting only adults, they are becoming increasingly prevalent in young children.  According to the National Eating Disorder Association (NEDA), one in four people battling an eating disorder is under the age of 18.

Among young people, eating disorders have the highest mortality rate of any psychiatric illness. This means that millions of young Americans are struggling with an illness that can have life-altering consequences.  It is important and crucial that parents, educators and clinicians be aware of the signs and symptoms of eating disorders in young children, so that these disorders can be treated as early as possible.

The cause of eating disorders is unknown. There are many factors that may contribute to their development, however, including genetics, hormones, environment, and psychology.

If you’re concerned that your child may be struggling with an eating disorder, it’s important to understand the signs and symptoms so that you can get them the help they need.  In this article, we’ll discuss the three most common types of eating disorders in young children.  We’ll also look at some of the warning signs that parents should be on the lookout for.

The Types of Eating Disorders

There are three main types of eating disorders: anorexia nervosa, bulimia nervosa, and binge eating disorder.  Each one affects people in different ways and can have serious consequences for physical and mental health.  Additionally, each of these three conditions involve distorted body image, dysfunctional thoughts about food and weight, and extreme emotional distress around food and eating.  Among these types of eating disorders, each one has its own set of symptoms and behaviors, which can be difficult to diagnose.

The most common type of eating disorder among young children is pediatric anorexia nervosa. Anorexia nervosa is a psychiatric condition characterized by an irrational fear of weight gain and a distorted body image. As a result, children with anorexia nervosa often restrict their food intake to the point of malnutrition. They may also engage in excessive exercise or purging behaviors, such as vomiting or using laxatives, in order to control their weight.

Bulimia nervosa is an eating disorder characterized by binge eating and purging. Binge eating is defined as eating an excessive amount of food in a short period of time, and purging is defined as the intentional removal of food from the body by vomiting, abusing laxatives, or diuretics, or by fasting.  Though it is often thought of as a disease that affects only adults, bulimia nervosa can also develop in young children. In fact, the number of cases of bulimia nervosa in young children is on the rise.

Binge eating disorder is characterized by a pattern of eating that involves eating large amounts of food in a short period of time, even when you’re not hungry. It’s sometimes called compulsive overeating or emotional eating.  Children with BED may eat large amounts of food when they are not hungry, or eat even when they are full. They may feel embarrassed or ashamed about their binge eating, and often try to hide it from others.

Signs Your Child is Struggling with an Eating Disorder

It can be tough to tell when a young child is struggling with an eating disorder. After all, their weight and eating habits can fluctuate quite a bit as they grow and develop.  It is important and crucial that parents, educators and clinicians be aware of the signs and symptoms of eating disorders in young children, so that these disorders can be treated as early as possible.  At times, parents may notice disordered eating behaviors at home. Some red flags to watch are, a sudden change in appetite, sudden avoidance of meal times and calorie counting.

The following are some of the most common warning signs of an eating disorder in young children:

If you suspect that your child may be suffering from an eating disorder, please seek professional help immediately.

To schedule an appointment, click on the Book Now button. There you will see our availability for the next two months. You can select the day and time that works best for you.

We look forward to being of assistance and will do our very best to help.

To learn more About Us: About Us

Send us a message